|
Categories: Spirits
|
Comments: 0
|
Tags: the whiskey hotline, kentucky, hits the road
The Whiskey Hotline team just got back from a whirlwind trip around Kentucky visiting some of the best distilleries, selecting new handpicks, building barrels and even distilling their own bourbon.

This trip was a little different in that we actually went down to MAKE bourbon, not just taste it. We spent the week creating our own barrel of bourbon with the team at Moonshine University that will be sold at our stores once it matures. Were expecting somewhere between 4 and 6 years.     We of course had to start with a recipe. We knew we wanted a high rye bourbon, but were unsure on the percentage of rye. We blended new make made from 100% corn, rye and barley until we got a ratio that we thought would best represent what we were looking for. Loads of spice, but still plenty of corn sweetness and a touch of fruity malt to keep it balanced. We settled on 51% corn, a ludicrous 45% rye and 4% malted barley. This is a barely legal bourbon at only 51% corn, and almost a rye! After a 3 day fermentation and two days of distillation our barrel of bourbon was ready for a long rest. Learn more about Moonshine University and our experience there in an upcoming Barrel to Bottle podcast.

Lucky for us, it was also time to pick some new Four Roses barrels. We ended up with 14 barrels that we loved spanning all Four Roses recipes except OBSO, OESO and OBSK which wont be available again until later this year or early next year. 2-3 of these barrels will be shipping to the stores each month through June 2018.

As part of our week at Moonshine U we also made our own barrel for our bourbon. Kelvin Cooperage has been in the business since 1963 when they started just outside of Glasgow, Scotland. As the demand for American oak increased exponentially the owners eventually relocated the entire operation to Louisville. Kelvin is unique for a large cooperage as they toast and char their barrels using wood fires instead of large propane jets. They believe this gives deeper and richer flavors to the barrels as making use of all their scrap oak pieces. Sustainable and flavorful! We went with a very deep toast, it was on the fire for almost 30 minutes, followed by a #2 char. This should give our bourbon more vanilla and coconut notes and less smoke, char and bitter notes. 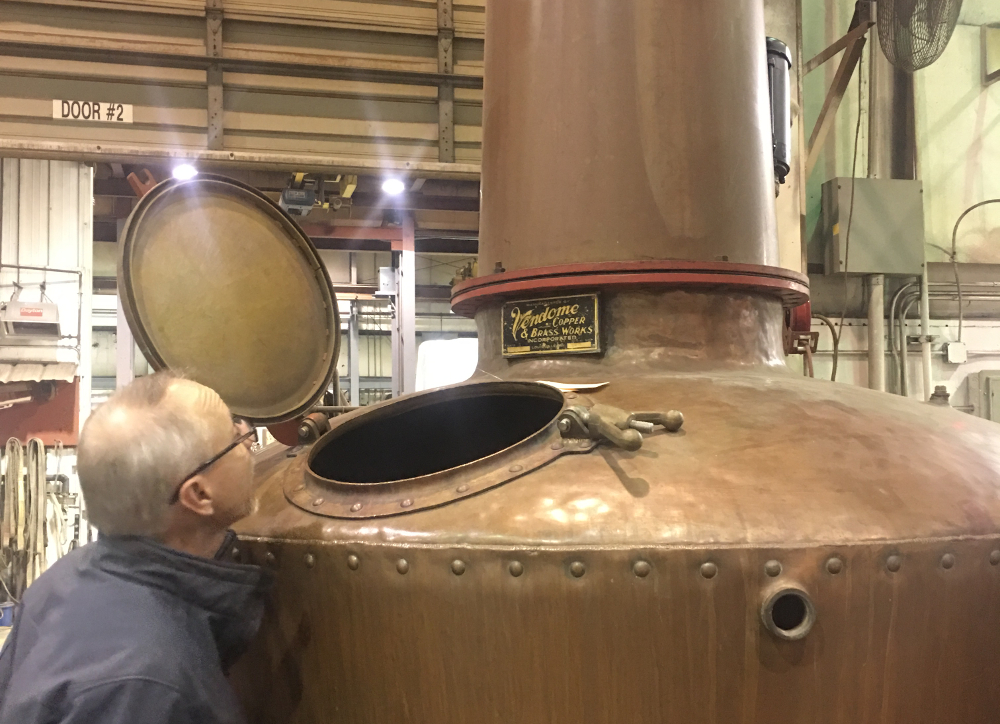 It only made sense to visit the epicenter of still manufacturing while in the epicenter of American whiskey. Vendome has been one of the worlds finest copper still manufacturers for over 100 years. Chances are youve seen their logo at a distillery youve visited large or small. They do all kinds of work from large, industrial ethanol stills to small pots for new craft distillers.

Its been a couple of years since we last visited the Castle & Key site, home of the long abandoned Old Taylor Distillery, and we hardly recognized it with all the progress they have made. Long neglected and overgrown, one of bourbon historys gems seemed doomed to rot until the Castle & Key team bought the property and began to bring it out of ruin. Theyve been very deliberate about honoring the past though, and there are reminders of that everywhere. The old distillery building has been repaired and modern distillation equipment installed, but old equipment used whenever possible. New ricks are filling the shells of the old warehouses and the grounds and gardens have been brought back to life. The Taylor distillery was built to host visitors. Colonel Taylor hosted lavish parties on the ground and the distillery even had a dedicated rail line and station to drop off visitors along with the needed supplies and grain. This is a unique bourbon experience and we cant recommend a visit to enough.

On the other side of the spectrum is the new Bulleit distillery in Shelbyville. Built with efficiency and sustainability in mind, this state-of-the-art distillery isnt yet open to the public but they are working on building a visitors center. Several different styles of bourbon are made here and blended to create the consistent Bulleit profile. Its a large, hi-tech distillery with a piece of bourbon history as well. The doubler from the old Stitzel-Weller stillhouse has been restored and is running on the new Bulleit still.   Check out the Whiskey Hotline for updates on new whiskey, tastings, sales and more!
Previous Next
0 Comment(s)
Categories
Recent Posts
Barrel to Bottle: Dessert Wines
Crafthouse Cocktails for the Holidays
Demo Kitchen Recipe: Moroccan-Style Spiced Lamb Chops
Beaujolais Nouveau 2020
Barrel to Bottle: Batch Cocktails