The Great American Beer Festival consists of 3800 beers and 780 breweries, attended by 60,000 people. We can't get enough of what the Denver-based festival has to offer, so our Binny's Beer Buzz team hit the road again to see what this year's festival would contain. We're still dreaming of the mango IPAs, PB&J porters, and an endless amount of sours and imperial stouts. Just a few highlights includ Avery, Wicked Weed, Goose Island, Melvin Brewing, Boneyard, Odell, Fremont and Dogfish Head.   We couldn't visit one of America's most mountainous states without spending time at some of the best breweries. More on our stops below.

Avery tells us they're still figuring it out but after a fantastic tour we'd say they know what they're doing. They're basking in a recent $30+ million dollar brewery expansion located in the town of Boulder. Their barrel aging program continues to grow daily and they are producing even more stellar sours than ever before. Adam Avery and his crew have come a long way since the early 90s and we're excited to see how they continue to grow.

Boulder Beer has been making quality beer for quite sometime. As the oldest brewery in Boulder and Colorado's first craft brewery, they've helped pave the way for local brewers like Avery. Since 1979, they've been brewing a lineup of classics such as Shake Chocolate Porter, Hazed Hoppy Session Ale, and Mojo IPA on their 50 barrel copper brewhouse. They participate in many green initiatives like solar thermal panel covered roofs, a compost system, and they print their 6-pack carriers on 100% recycled paperboard. 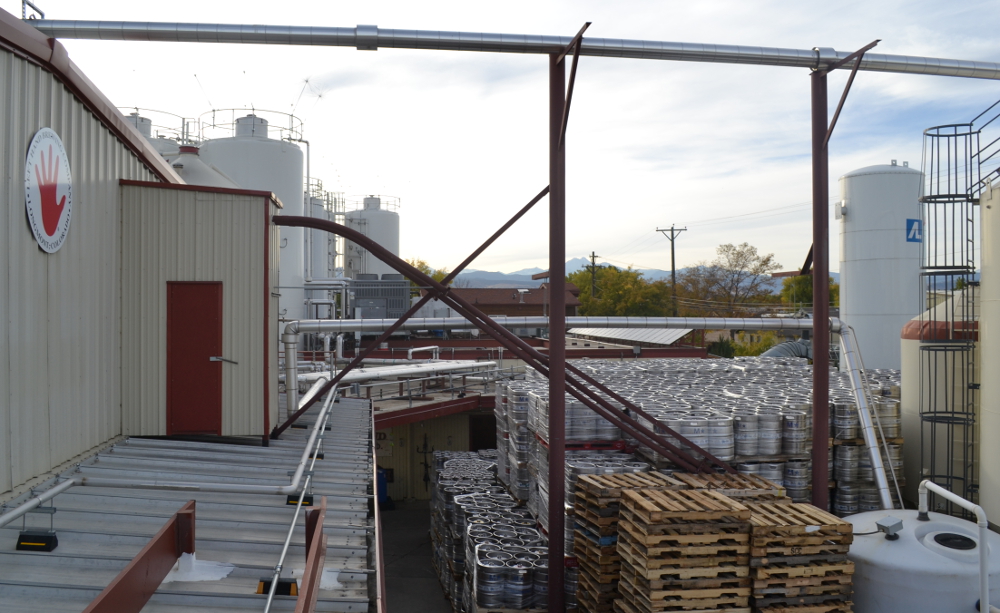 Known widely for their Nitro infused beers, Left Hand is both the first American and the first craft brewery to master the science of bottling a Nitrogen beer without a widget. This enables beer fans to enjoy the draft experience of a Nitro beer at home. When they're not changing the craft beer world, they are working to act more sustainable and efficient. Left Hand recently added a Braukon Kettle to their brewhouse, which uses less than half of the gas consumption as an average kettle and reduces the steam, hops and boil time. Additionally, they've installed a 4.8 kW solar PV array, large enough to power their tasting room, offices and retail coolers. Left Hand Brewing recently became 100% employee owned, which seems to be a growing trend in breweries fighting to remain "craft" and loyal to their fans.

Former Binny's employee Jason Bell left us (sadly) years ago to open his dream brewery in Littleton, Colorado. Bell and his squad have been experimenting with many unique styles of beer since inception. From pepper pineapple ales to Belgian ales with peaches to a White Russian mimicked beer - they're trying it all. When they're not brewing, they are helping local shelters find homes for pups and host some incredible parties overlooking the gorgeous mountain views. They quite literally are living the dream.

New Belgium recently celebrated 25 years and like Left Hand, have recently become 100% employee owned. Their journey started with original founder, Jeff Lebesch, riding a mountain bike around Belgium. The locals weren't used to his "fat tires." See where we're going with this? Since then, the brewery has transformed into the third largest brewery in the US. Also, it's totally worth mentioning New Belgium Brewery leads the pack of Colorado breweries in efficiency and sustainability. They use a Merlin brew kettle that reduces natural gas consumption by cutting the boil time in half. Instead of heating the container to boil water, the Merlin has an internal boiler plate, which helps reduce natural gas consumption and cut back on water loss.

If there was one stop along the way that blew our minds - it was Odell. We haven't had the privilege of having them on our shelves, yet, but we're told we may carry them sooner than later. We couldn't believe the size of the brewery, level of production, and of course - the incredible beer. They gave us a sneak peek at their beloved Friek, without the raspberries, which was amazing on its own. We even got to chat with Odell Brewing Co. owner Doug Odell. Doug started his brewing career at Anchor Brewing Company in the 70's and has been hooked ever since. Who could blame him? Since opening in 1989, Doug has grown Odell Brewing to the 34th largest craft brewery in the country, distributing beer to just 11 states.

With new locations in Austin, Texas and Brevard, North Carolina - in addition to their 19-year-old brewery in Longmont, Colorado - they are leaving a strong trail in the craft beer world. They've recently acquired two breweries - Cigar City (Florida) and Perrin Brewing Company (Michigan), and are helping these already strong brewers to be bigger and better, like themselves. Oskar Blues was one of the first breweries to can beer, starting with Dale's Pale Ale. Check out the Beer Buzz for updates on new beer, tastings, sales and more!

Each year the number of Christmas beers continues to grow. Cold winter weather and decadent dinner parties have inspired everything from rich roasty porters and stouts, to spicy winter warmers and barleywines.

Whether you?re lounging in a hammock, chilling by the pool, or just coolin' off in the shade - we have a bounty of delicious berry brews perfect for these dog days of summer

Back in 2014, the Binny’s Beer Team had the pleasure of attending Sierra Nevada’s Beer Camp #110 in Chico, designing a spicy IPA that came to be known as Ryeday the 13th. Fast forward to 2017, we were pumped to return to camp, this time in Mills River, North Carolina.