If you did not advance, but would like your score sheet, they will be available for pick up at the final event, or email [email protected]   ---   We have hosted the Binny's Homebrew Contest for ten years... can you believe it? We have another great contest lined up this year. Once again, were excited to host guest judge Jim Koch. Best known as Samuel Adams Founder, Jim Koch will pick the winner this year, and award the coveted first prize: a trip for two to the 2017 Great American Beer Festival in Denver. Read on for more details.

Heres the deal. We start accepting entries on Sunday, July 30th, as soon as the doors open at Binny's Chicago - Lincoln Park at 11:00 am. Drop off your entry, complete with a filled entry form. Were accepting just 75 entries. Contest entry is free. The contest will likely fill up fast; keep an eye on our Twitter and we will announce when the contest is full. Binnys beer experts will judge the 75 entries and narrow them down to the top 10. Well announce the top 10 HERE the Wednesday, August 2nd.

Join us at the Binnys Lincoln Park Tasting Room on Monday, August 7th, for a special celebrity judging featuring Samuel Adams Founder, Jim Koch. Koch will judge the remaining top 10 homebrews and pick the winner. This event will feature samples of Sam Adams beers, plus well have several limited release beers will on draft. Winners will be announced around 7pm.   Prizes The first place homebrewer will win a trip for two to the 2017 Great American Beer Festival in Denver, including tickets, airfare and hotel. Several runners up will also win valuable prizes, to be announced. A label is not required, but we do love cool labels. Well pick one Best Label winner, who will receive a $50 Binnys Gift Card. All participating brewers will receive beer evaluation sheets with judges comments.   Rules  Each household may enter one beer.  Entrants must drop off three 12oz bottles or two 22oz bottles of their beer, plus a completed entry form rubber banded around the bottles. Click here to download entry form.  Entrants must be present at Final Judging Event no later than 8:00 pm on August 7th to claim tasting evaluation sheets and any prizes. 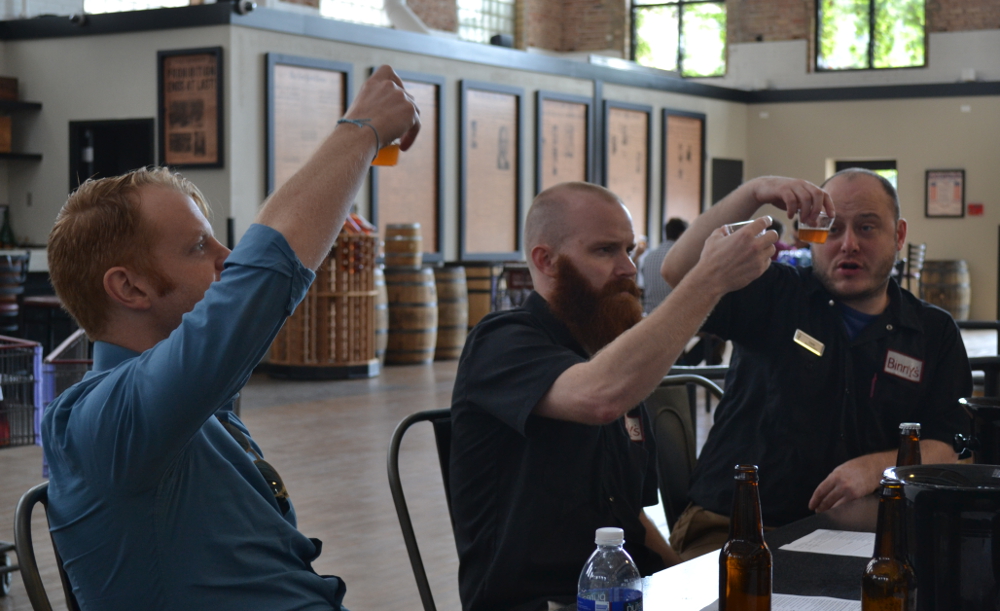